Triggered is an art experiment I am undertaking to translate my experiences with mental illness into game design. I attempted to raise fund to develop it and am still doing just that. My first attempt at a hail Mary crowd funding effort didn’t go well. But with good reason, it was a long shot. I had very little show, and not much beyond my words.

So I don’t want to begin developing the narrative side until I understand my funding and situation better. I need more money or the narrative is going to suffer due to the erraticness of my behavior during poverty. I have a hard time doing certain things when I am exhausted because I am afraid of the noose of poverty closing around my neck. I despise the effect money has on art and I refuse to compromise Triggered to get paid. Not because of anything beyond I want Triggered to not give off finance vibes and if I use it as a finance vehicle it will.

In order to compromise I am willing to develop a portion of Triggered into a free to play sort of game / play thing. Triggered is about interacting with a world that has observable rules and limits. While privately dealing with things that seem to have undefinable rules and unobservable limits. To starkly draw this comparison I want to give most of the functions of the world of Triggered a very accessible and real feeling. Instead of having just an elevator the elevators in triggered will be made of sub components. That are seen over and over and understood. Weaving throughout the world a sort of established mechanical reality. That these things function like expected when arranged. It’s easy to see and easy to accept as a reality.

With this in mind I came up with the idea to have a contraption creator. This is drawing heavily on games and programs in the past that I have willingly paid for. Minecraft and the Fantastic Contraption are both games that I shelled out money for to expand my experience on the game. They both offered decent free experiences but I decided to volunteer money because I enjoyed the concepts so much (to be all hipster about it I bought minecraft in alpha).

The contraption creator then seeks to make those underlying mechanics accessible to people but in a format that captures some of the things I enjoyed about those other games. Of course I don’t think you can build a contraption creator idea without also being influenced by The Incredible Machine. Which just through my entire life has plagued my ideas for game design. I spent too much time in my child hood building things. Anyways I’ve come up with nearly 120 individual parts that go Together. And made is accessible to people. These videos are through varying dates so forgive the different looks. These are all just me messing around and hitting record. If I’ve somehow offended you by borrowing and or forgetting to credit people, I’m sorry.

Lasers are activated by logical components. When they are on they shoot a ray of light forward. At the end of this ray of light a burst of light is found. The ray of light can interact with several different things. If it hits things that can be heated it will heat them based on the intensity of the light. If it hits mirrors or mirror balls it will reflect. There is a separate logical component that represents a Gel filter that will change the color or the lasers.

The gel filters work by blocking out different colors. Here is an example of it. 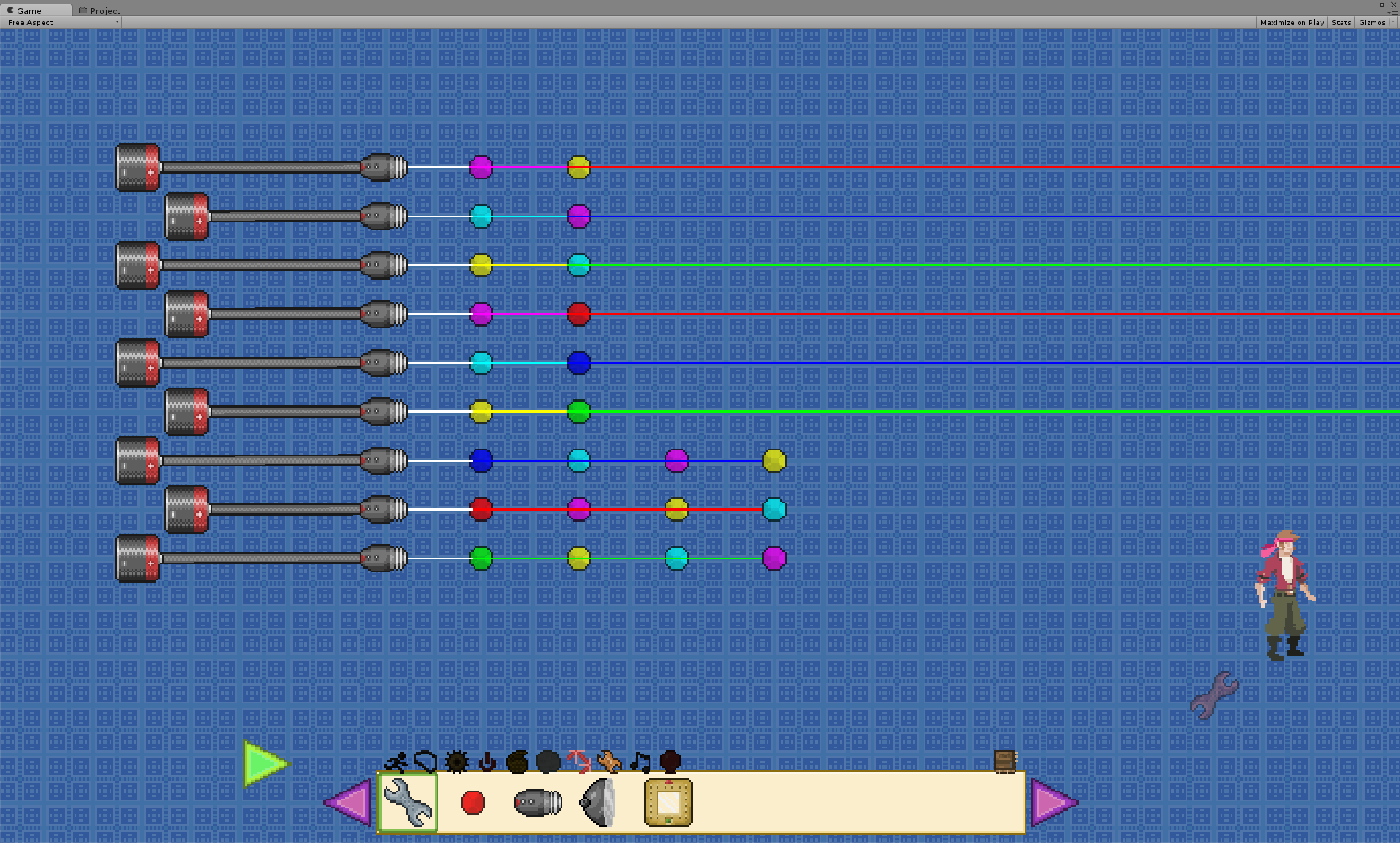 There are lumospheres which get charged and grow brighter and brighter as the laser shoots it. Providing light Also laser orbs are bouncing balls of light that will change their color when hit by a laser. There are laser orb dockers that will turn on when they get an orb of the appropriate color. Here is Simon standing underwater with one. This is a comparison between the early laser and the current laser.

There are several different systems at work in triggered. In the same manner that the laser above interacts with certain parts. There are logical parts that work together.

Those are music boxes that are tuned to different notes. Being activated as toggle switches turn on and off. The binary numbers display what state the switches are in. Using an increasing amount of toggle counters and a timed repeater you can move through a sequence. Here is that concept displayed using toggle switches and other logical components.

The logical components support basic binary logic functions. XOR, OR, AND, NOT, and some other toggle like binary functions as well.

The important part is that they work on input / output propagation. So any output can be plugged into any input. This means that the limitations to the functions are as limited as one can rearrange a near infinite number of 1’s and 0’s.

There are several sub systems that interact with the logic system. Taking advantage of the ability to wire things together. There is a music player that allows you to play sounds and change noise, pitch and volume. All functions are controlled by logical inputs. Allowing complicated music boxes to be constructed. There is a pinball bumper that sends a signal when it is struck. This means it can be used to play a sound effect for instance. While another bumper may pitch the sound.

Recently added a camera object. It interacts with the logic so when it receives an on signal the camera moves focus. Allowing monitoring and recording of complex Rube Goldberg Machines.